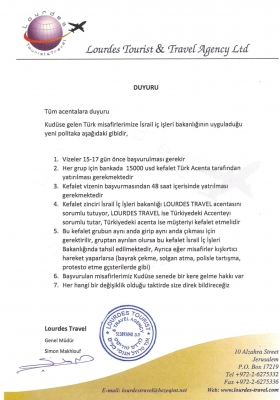 Burak Association recently announced that Israel and its public in 2018 about the unjust, unlawful practices and human rights violations of Jerusalem and the Masjid al-Aqsa were introduced to the public by a press release.In return, the Israeli Foreign Ministry in its press statement claimed that the news about restrictions on the visit of Turkish citizens to Jerusalem was et unfounded “and tried to justify it by accepting the ban of opening a Turkish flag in Meccid-i Aksa.Whenas, this statement of the Israeli Ministry of Foreign Affairs is incompatible with the facts and practices.
In the sixth article of the new policy applied by the Israeli Ministry of Interior for our Turkish guests coming to Jerusalem ı, the Our guests who apply for visas have the right to come once a year to Jerusalem . This sentence is the most precise and clear statement of restrictions on visits to Jerusalem and Masjid al-Aqsa. Moreover, the restrictions are not limited to this. Besides, it is stated in the second article of the same announcement that for each group to visit to Jerusalem, the firms should pay the $ 15 thousand bail fee. It is also stated in the fifth article of the announcement that this bail will be confiscated by the Ministry of Interior due to the provocative action of the visitors (drawing flags, shouting slogans, discussing with the police, protesting and demonstrating). In this way, Israel is intimidated by the responsibility of imposing responsibility on the visitors to the tourism agencies, and the visit to Jerusalem makes the organization difficult.
As of 2015, it is understood from the declarations of the tourist agencies and the results of the visa application that there is no visa when they want to visit Jerusalem without the parents of the young people under the age of 18 years. For this reason, especially the applications for the visit of the secondary school youth to Jerusalem are not accepted by the firms. This embodiment is another example of the restrictions mentioned.
In the aforementioned press statement of the Israeli Ministry of Foreign Affairs, it is said that it is forbidden to open the flag of any country or any organization, including Israel, not only the Turkish flag in Meccid-i Aksa. Thus, the prohibition of opening the Turkish Flag is officially confirmed. In addition, there are many photographs about the intervention of the Jews who opened the Israeli flag in Al-Aqsa Mosque. As it is seen, prohibited is not applied to Jews.
In the press release as the justification of the ban; Mek This ban does not have any political justification, it is only due to the fact that the Masjid al-Aqsa is a sacred space and that this sanctity is respected “.The state of Israel, who defended the ban for a reason such as respecting the ban, has for years disregarded all the sacred values and entered into the place of worship by means of its postals and intervened with weapons. and it is known that he has carried out countless atrocities. Is this Israel´s sacred respect?
It should be known that Jerusalem and Masjid al-Aqsa are a sacred value of the entire Islamic Ummah. The occupation and oppression there is never acceptable. As we are the followers of what has been done so far, we will inform the public that we will be the followers of unfair and unlawful practices.
Adem YENIHAYAT
President Burak Association
Share Tweet Share Pinit Send Send
© 2021, Burak Mukaddes Mekanları Tanıtma Ve Kültür Derneği