THOSE WHO CAPTIVE THE MASJID AL-AQSA! 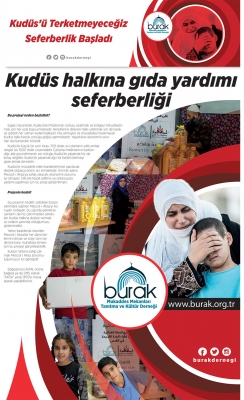 Since 1967, the population of Zionist Israel, which has occupied Jerusalem, is only 8 million. Israel has an Arab population of around 300 million people. But the Arabs have neither the powerful states nor the leaders of Israel embracing the Jerusalem cause. Qatar, the only Arab country to move to Jerusalem, is the target of others.
In 1911, Jerusalem was taken away from the Ottoman Empire and in 1967 it was occupied by Israel with the support of the United States, Britain and other Western states. Israel, the United Nations since its decision to expand its occupation of Jerusalem, despite the decision of the world´s first qible, the Prophet Hz. He continues to undermine Masjid al-Aqsa, where Mohammed (sas) rose to the estate. Here is the critical question: nasıl How is the state of terror the Zionist Israel so comfortable? “Year was 1187. The Crusader army, along with their families, came near the Tebariye lake of Palestine, with their beds on the mattresses. The purpose of the Crusaders only Hz. It was not to take the conquered Jerusalem from the hands of the Muslims, but to settle fully in Jerusalem.. Crusader army history "Hittin war" against Muslims in Saladin was defeated in the war command. How can the crusaders do not win against Muslims? Israel has developed two strategies. The first of these is the introduction of puppet leaders in the Arab countries. The second one is that there is no unity in the countries in question, which in turn means chaos in those countries, the realization of the blows, the support of minorities.

11 SEPTEMBER WAS ON ISRAEL
The Camp David agreement signed between Egypt and Israel in 1978 was the first concrete step in this strategy, and the attack on the twin towers on September 11, 2001 was a turning point for Israel´s security. The United States entered Afghanistan on October 7, 2001 under the pretext of arresting al-Qaeda terrorist organization leader Osama bin Laden, days after the September 11 attack, as the US invaded Afghanistan under the pretext of terror, killing thousands of Muslims, raping women, sacked resources. The United States, which went to Afghanistan to end terrorism, turned the country into a terrorist confederation in the past 18 years. President Bush, together with his British counterpart Blair, pointed to Iraq´s leader Saddam Hussein as the name behind the 9/11 attack. In addition, the United States entered Iraq on March 20, 2003, with Saddam´s alleged chemical and nuclear weapons. All of Iraq´s oil resources were ransacked, and the US, with the promise of t bringing democracy yet to Iraq, only led to death, as if it were not enough to plunder Iraq. More than 1 million Muslims were martyred by the US. This move by the United States, Egypt, Libya, Saudi Arabia, the United Arab Emirates, Bahrain, Jordan, Lebanon, Tunisia, as well as the rulers of the ruling of the rulers of the Muslim countries. The agenda of the leaders of the Islamic countries ’not to defend Jerusalem, but when will it come to us? How can we help the US?

ONE DAY THEY CAN HANG ALL OF US
As a matter of fact, Muammar Gaddafi, the Libyan leader of the time, expressed his view at the Arab League Summit in 2008 as follows: ında Our countries were occupied. Palestine was taken, Iraq was taken and the islands of the United Arab Emirates. Iran, Turkey and other countries there is a problem between us, we are not the interests of the Arabs. What is the reason for the invasion and destruction of Iraq and the killing of nearly 1 million people? Let our American friends answer the question: Why Iraq? What is the reason? A thousand spruce Iraqi? No it is not. Those who attacked New York are Iraqi? No it is not. A foreign power comes, invades an Arab country and hangs its president. And we sit here, sit outside, play. Why don´t you investigate Saddam Hussein hanging? How does a prisoner of war hang? Why is the question of the murder of Saddam Hussein not be made? The leaders of all Arab countries were hanged by hanging. But why are we sitting on the sidelines? You can be the next one. Yeah. America fought with Saddam against Khomeini. He was an American friend. While Iraq was being destroyed, US Defense Secretary Rumsfeld was a close friend of Saddam. The result sold him and they hanged him. You´re friends with America. Let´s say, "We", not you. But on such a day, America can hang us. Leri In fact, Gaddafi´s findings that shed light on the future came true with the Arab Spring, which started in 2010. The Arab Spring also eliminated the last obstacles to Israel. Today, Egypt, which has a population of 98 million, is ruled by the dictator Sisi. It is ruled by the Ottoman enemy Abdullah bin Zayed in the UAE, under the patronage of Saudi Arabia Crown Prince Mohammed bin Salman. Read more Sabri İşbilenAnaliz sabri@dirilispostasi.com