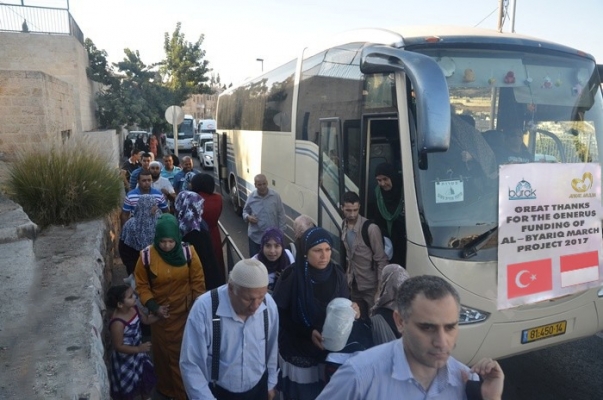 BEYARIC EXPEDITIONS
Why did we launch this project?

The ultimate goal of the Israeli occupation of Israel is to destroy the Islamic civilization and build a Zionist city.
In order to accelerate its dominance in the city, the occupying Israel imprisoned the Palestinian people with various pretexts,
increased their tax rates, ransacked houses in the middle of the night and created various mechanisms to make young people
addicted to drugs, preventing children from going to school. The invading Zionists, who want to make sure that their ambitions
take place as soon as possible, prevent the Muslims from entering the city of Jerusalem and the Masjid al-Aqsa.
When the Zionist Jews found the Masjid al-Aqsa empty, they raided our emanations with police and soldiers, especially after the morning prayer.
The raids at the end of 2018 increased by 17% compared to the previous year. The goal of the occupiers is to perform spatial division first after
realizing the temporal division.
During 2018, the number of Zionist Jews who raided the Masjid al-Aqsa was 29,801.
With excuses in order to avoid the time being from Turkey to issue visas to the citizens of Turkey, are admitted to the limit irregularity able to go
once a year.
They aim to establish a Zionist temple by building the Masjid-i Aksa. While the occupying forces try so hard for superstitions, it is the duty of the
Muslims to strive for our cause and not to leave the Masjid al-Aqsa blank. With the project that we started with the name of Beyarik Expeditions,
we aim to not leave our first qibla blank by moving the Muslims in Jerusalem and its surroundings to the Masjid al-Aqsa.
Goal of Project
The aim of our project, which we will advance through donations, is to be the occasion for the 100,000 Muslims living in and around Jerusalem to reach
the Masjid al-Aqsa. One of the objectives of our project is to disrupt the plans of the occupying Zionists aiming at the temporal and spatial division of
Jerusalem, to have the trust of the Ummah and to have Muslims in the Masjid al-Aqsa to be left without a Muslim. Jerusalem doesn´t need us.
We are waiting for your support to our project by saying that we need Jerusalem.
Share Tweet Share Pinit Send Send